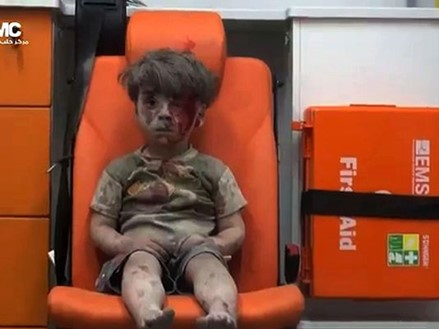 Washington’s media presstitutes are using the image of the child to bring pressure on Russia to stop the Syrian army from retaking Alleppo.  Washington wants its so-called moderate rebels to retain Alleppo so that Washington can split Syria in two, thereby keeping a permanent pressure against President Assad.

As for the little boy in the propaganda picture, he does not seem to be badly injured. Let us not forget the tens of thousands of children that Washington’s wars and bombings of 7 Muslim countries have killed without any tears shed by CNN anchors, and let us not forget the 500,000 Iraqi children that the United Nations concluded died as a result of US sanctions against Iraq, children’s deaths that Clinton’s Secretary of State Madeleine Albright said

Let us not forget that Washington’s determination to overthrow the Syrian government has brought many deaths to Syrians of all age groups. Washington alone is responsible for the deaths. The evil Obama regime has stated over and over that “Assad must go” and is prepared to destroy the country and much of the population in order to get rid of him.

According to the Obama regime, Assad must go because he is a dictator. Washington tells this lie despite the fact that Assad was elected and re-elected and has far higher support among Syrians that Obama has among Americans. Moreover, whatever Washington accuses Assad of doing to Syrians is nothing compared to the death and destruction that Washington brought to Syria.

Reprinted with permission from PaulCraigRoberts.org.