Malaysia: Failure of U.S. to Subvert the Elections and Install a “Proxy Regime” 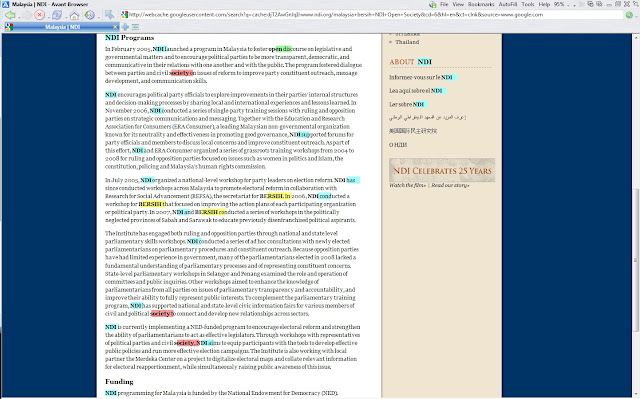 Image: Despite the US mobilizing the summation of its media power and pouring millions of dollars into the opposition party, including the creation and perpetuation of fake-NGOs such as Bersih and the Merdeka Center, Malaysian Prime Minister Najib Razak sailed to a comfortable victory in this year’s general elections. The cheap veneer has begun peeling away from America’s “democracy promotion” racket, leaving its proxies exposed and frantic, and America’s hegemonic ambitions across Asia in serious question.

The BBC in its article, “Malaysia election sees record turnout,” lays out the well-rehearsed cries of “stolen elections” used by the West to undermine the legitimacy of polls it fears its proxy candidates may lose – with the US-funded Merdeka Center cited in attempts to bolster these claims. Their foreign funding and compromised objectivity is never mentioned (emphasis added) :

Allegations of election fraud surfaced before the election. Some of those who voted in advance told BBC News that indelible ink – supposed to last for days – easily washed off.

“The indelible ink can be washed off easily, with just water, in a few seconds,” one voter, Lo, told BBC News from Skudai.

Another voter wrote: “Marked with “indelible ink” and voted at 10:00. Have already cleaned off the ink by 12:00. If I was also registered under a different name and ID number at a neighbouring constituency, I would be able to vote again before 17:00!”

Independent pollster Merdeka Center has received unconfirmed reports of foreign nationals being given IDs and allowed to vote.

However, an election monitoring organization funded by a foreign government which openly seeks to remove the current ruling party from Malaysia in favor of long-time Wall Street servant Anwar Ibrahim is most certainly not “independent.”

The ties between Anwar Ibrahim’s “People’s Alliance” and the US State Department don’t end with the Merdeka Center, but continue into the opposition’s street movement, “Bersih.” Claiming to fight for “clean and fair” elections, Bersih in reality is a vehicle designed to mobilize street protests on behalf of Anwar’s opposition party. Bersih’s alleged leader, Ambiga Sreenevasan, has admitted herself that her organization has received cash directly from the United States via the National Endowment for Democracy’s National Democratic Institute (NDI), and convicted criminal George Soros’ Open Society.

This article originally appeared on :