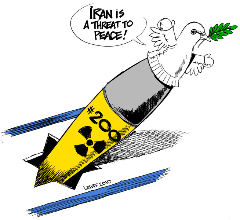 Israel has held a series of meetings with prominent figures from a number of Gulf and other Arab states in recent weeks in an attempt to muster a new alliance capable of blocking Iran’s drive toward nuclear weapons, Israel’s Channel 2 reported Wednesday.

According to the report, Prime Minister Benjamin Netanyahu has been supervising a series of “intensive meetings” with representatives of these other countries. One “high ranking official” even came on a secret visit to Israel, the report said.

The report came a day after Netanyahu, in an overlooked passage of his UN speech, noted that shared concerns over Iran’s nuclear program “have led many of our Arab neighbors to recognize… that Israel is not their enemy” and created an opportunity to “build new relationships.”

The Arab and Gulf states involved in the new talks have no diplomatic ties with Jerusalem, the report noted. What they share with Israel, it said, is the concern that President Hasan Rouhani’s new diplomatic outreach will fool the US and lead to a US-Iran diplomatic agreement which provides for “less than the dismantling of the Iranian nuclear program.”

“There is a deep sense of anxiety concerning what’s happening in Iran,” Israeli Ambassador to the UN Ron Prosor told Channel 2 Wednesday. While he avoided comment on any direct contact between Israel and the Gulf states, he said there were messages “from all over the region” being transmitted to the highest ranks of the US government.

Likud MK Tzachi Hanegbi, who is close to Netanyahu, indicated to the Times of Israel after the prime minister’s speech to the General Assembly on Tuesday that Israel was no longer certain that the Obama administration would use force against Iran even in a last resort to stop[ it attaining nuclear weapons.

In the past, Israel maintained an interest office in Doha, Qatar, but it was closed in 2009. It is widely believed that Jerusalem still maintains some sort of engagement with various states in the Persian Gulf region, with whom it has many joined interests. The government is extremely careful not to publicly acknowledge such ties — in order not to jeopardize them.

He immediately added: “The dangers of a nuclear-armed Iran and the emergence of other threats in our region have led many of our Arab neighbors to recognize, finally recognize, that Israel is not their enemy. And this affords us the opportunity to overcome the historic animosities and build new relationships, new friendships, new hopes.”

He went on: “Israel welcomes engagement with the wider Arab world. We hope that our common interests and common challenges will help us forge a more peaceful future.”

A number of Sunni countries, such as Saudi Arabia, Kuwait and the United Arab Emirates, have been vocally opposed to Iran’s nuclear program, placing them and Israel on the same side of the debate.

A carelessly edited version of the 2013 Israeli state budget revealed that Israel opened a diplomatic office somewhere in the Persian Gulf between 2010 and 2012. Foreign Ministry sources asked the Finance Ministry to remove the sensitive clause from the budget — and from the public’s eye.

#1 Israel, Gulf states said discussing new alliance to stop Iran — Does Panic Away Work 2014-02-21 21:26
It's actually very complex in this full of activity life to listen news on Television, so I simply use internet for that purpose, and
obtain the latest information.
Quote
Refresh comments list
RSS feed for comments to this post