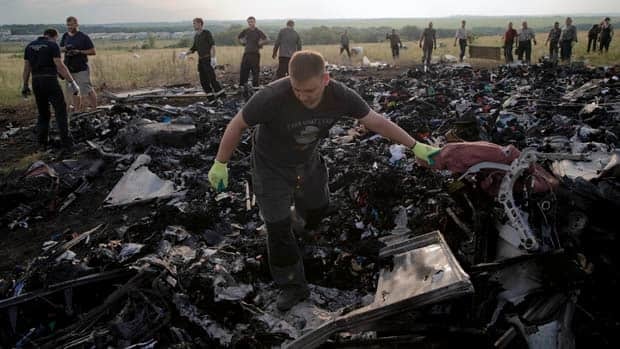 A Thursday article in the New Straits Times, Malaysia’s flagship English-language newspaper, charged the US- and European-backed Ukrainian regime in Kiev with shooting down Malaysian Airlines flight MH 17 in east Ukraine last month. Given the tightly controlled character of the Malaysian media, it appears that the accusation that Kiev shot down MH17 has the imprimatur of the Malaysian state.

The US and European media have buried this remarkable report, which refutes the wave of allegations planted by the CIA in international media claiming that Russian president Vladimir Putin was responsible for the destruction of MH17, without presenting any evidence to back up this charge.

The New Straits Times article, titled “US analysts conclude MH17 downed by aircraft,” lays out evidence that Ukrainian fighter aircraft attacked the jetliner with first a missile, then with bursts of 30-millimeter machine gun fire from both sides of MH17. The Russian army has already presented detailed radar and satellite data showing a Ukrainian Sukhoi-25 fighter jet tailing MH17 shortly before the jetliner crashed. The Kiev regime denied that its fighters were airborne in the area, however.

The New Straits Times article began, “Intelligence analysts in the United States have already concluded that Malaysia flight MH17 was shot down by an air-to-air missile, and that the Ukrainian government had had something to do with it. This corroborates an emerging theory postulated by local investigators that the Boeing 777-200 was crippled by an air-to-air missile and finished off with cannon fire from a jet that had been shadowing it as it plummeted to earth.”

It cited “experts who had said that the photographs of the blast fragmentation patterns on the fuselage of the airliner showed two distinct shapes—the shredding pattern associated with a warhead packed with ‘flechettes,’ and the more uniform, round-type penetration holes consistent with that of cannon rounds.”

The New Straits Times cited several sources to substantiate its position. One was testimony by a Canadian-Ukrainian monitor for the Organization for Security and Cooperation in Europe (OSCE), Michael Bociurkiw—one of the first investigators to arrive at the crash site. Speaking to the Canadian Broadcasting Corporation on July 29, Bociurkiw said: “There have been two or three pieces of fuselage that have been really pockmarked with what almost looks like machine gun fire; very, very strong machine gun fire.”

Another source the paper cited was an article, “Flight 17 Shoot-Down Scenario Shifts,” by former Associated Press reporter Robert Parry, who now writes for the ConsortiumNews.com web site. Given the lack of any evidence supporting US charges that pro-Russian forces shot MH17 down with a Buk anti-aircraft missile, Parry said, “some US intelligence analysts have concluded that the rebels and Russia were likely not at fault, and that it appears Ukrainian government forces were to blame, according to a source briefed on these findings.”

Parry indicated that sections of the US intelligence apparatus have concluded that US secretary of state John Kerry’s claims that pro-Russian forces shot down the plane are lies.

“Only three days after the crash, Secretary of State Kerry did the rounds of the Sunday talk shows making what he deemed an ‘extraordinary circumstantial’ case supposedly proving that the rebels carried out the shoot-down with missiles provided by Russia. He acknowledged that the US government was ‘not drawing the final conclusion here, but there is a lot that points at the need for Russia to be responsible,’ ” Parry wrote. “By then, I was already being told that the US intelligence community lacked any satellite imagery supporting Kerry’s allegations, and that the only Buk missile system in that part of Ukraine appeared to be under the control of the Ukrainian military.”

Finally, the New Straits Times and Parry both cite retired Lufthansa pilot Peter Haisenko, who has pointed to photographic evidence of MH17 wreckage suggesting that cockpit panels were raked with heavy machine gun fire from both the port and starboard sides. “Nobody before Haisenko had noticed that the projectiles had ripped through the panel from both its left side and its right side. This is what rules out any ground-fired missile,” Parry wrote.

The New Straits Times report constitutes a powerful accusation not only against the Ukrainian government, but against Washington, Berlin, and their European allies. They installed the Kiev regime through a fascist-led putsch in February. They then deployed a series of intelligence operatives and Blackwater mercenaries who are closely coordinating the various fascist militias and National Guard units fighting for Kiev on the ground in east Ukraine, where MH17 was shot down.

These forces now stand accused not only of stoking an explosive political and military confrontation with Russia on its border with Ukraine over the MH17 crash, which threatens to erupt into nuclear war, but of provoking the confrontation through the cold-blooded murder of 298 people aboard MH17.

These charges from Malaysia are all the more significant in that Malaysia is not a strategic adversary of the United States. Unlike Russia, which already presented evidence suggesting Ukrainian involvement in the crash, Malaysia has no political motive for trying to discredit the US, the European powers, or their puppet regime in Kiev.

While it has not aligned itself as openly as the Philippines or Vietnam with the US “pivot to Asia” aimed at isolating China, Malaysia has pushed for deployments of its forces in the South China Sea to contest Chinese influence in the area, in line with the agenda of the US “pivot.”

Indeed, the New Straits Times and its sources are basing themselves on sections of US intelligence that, disgruntled by the complete lack of evidence to back up US charges against Putin and fearing catastrophic military escalation, have criticized Washington’s handling of the crisis (see: “Former US intelligence personnel challenge Obama to present evidence of Russian complicity in MH17 crash”).

These developments also constitute yet another indictment of the Western media, which have completely blacked out the investigation of the crash of MH17 and the latest material in the New Straits Times. Instead, the elements in the CIA and their Ukrainian proxies driving the war in eastern Ukraine have been able to escalate the confrontation with Russia and demonize Putin, without any of their unsubstantiated accusations of Russian involvement in the MH17 crash being challenged.

Kiev regime officials are continuing to stonewall the investigation, refusing Malaysian requests for information about MH17, such as the record of communications between the doomed plane and air traffic controllers in Kiev.

In an interview with the New Straits Times, Ukrainian Ambassador to Malaysia Ihor Humennyi denied reports that the tapes had been seized by Ukraine’s State Security Service (SBU). “There is no proof or evidence that the tapes were confiscated by the SBU. I only read this in the newspapers,” he said.

When the New Straits Times asked where the tapes were, Humennyi said he did not know. “We don’t have any information that it had not been given to the investigation team, or that it was not received by the [team of international] investigators,” he said.