Deprecated: Array and string offset access syntax with curly braces is deprecated in /home/lybs0cinwsl2/public_html/att/libraries/vendor/joomla/string/src/phputf8/utils/validation.php on line 40
 The Fall of Journalism Ethics and Standards in the Corporate Press

Who Controls The Media?
Warning: "continue" targeting switch is equivalent to "break". Did you mean to use "continue 2"? in /home/lybs0cinwsl2/public_html/att/templates/att2017a/functions.php on line 199


The Fall of Journalism Ethics and Standards in the Corporate Press 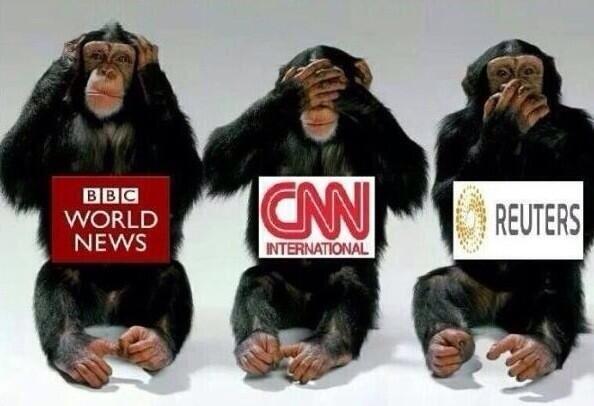 While browsing through daily news reports and looking for independent and unbiased sources, it becomes clear the situation is getting worse day by day. While journalism never really was that far away from politics and propaganda, the present-day state may have reached the bottom as regards professionalism and ethics.


Merely looking at the coverage of the Syrian conflict, it becomes obvious that there are hardly any ethics or standards left, at least as regards the corporate and mainstream media outlets, some of which are even taxpayer-funded.
In the past seven years of covering the Syrian conflict, we have seen some of the biggest distortions, fabrications, lies, manipulations and falsifications of events. These include: Dead children that suddenly become alive; refugees from at least three different conflicts on at least three different continents; cardboard-made buildings that are collapsing; Al Qaeda associates who suddenly become human rights activists; American males in their 40's posing as young and oppressed Syrian lesbians; convicted adult individuals who suddenly become little children and 7-year old girls who speak English with a proficiency of an educated adult native speaker, despite otherwise barely understanding a word of English - these are only some of the many examples from the ocean of Syria-related media hoaxes that have, for the past several years, been flooding people’s minds. 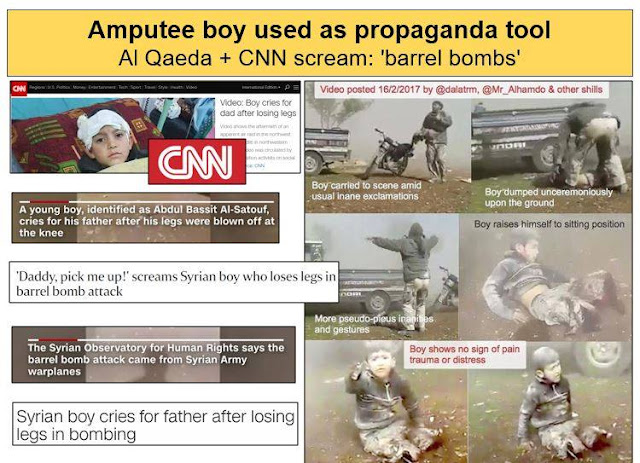 On these examples alone, a question immediately arises of how accurate and honest the reporting on other issues really is. Given how far modern journalism has gone on the Syrian issue, it is legitimate to assume that coverage of other events is not much different.
It may be true that journalism never was alien to the establishment as it was always needed for propaganda purposes, especially in the absolutist and authoritarian systems, however, one is simply amazed upon realizing that ties between journalism and the governing political powers are even closer in the so-called “free and democratic world”, where a diversity and plurality on reporting would be expected. Instead, the reports on crucial issues, namely the conflicts in Yemen, Syria and Donbass, and the foreign policies of US and NATO, are pretty much the same. Even opinionated articles, features and columns have become pretty much alike across all media.
In today’s mainstream press, the situation is even worse than it was decades ago. At least at the time of the Vietnam war, there were few honest journalists who risked their lives by traveling to the midst of the warzones and presented the world with truth, previously hidden under the blanket of lies by the ruling elites and their media parrots.
Nowadays we see less and less of these things. Although it’s true that in the past few years several journalists traveled to the embattled areas of Syria, Iraq, Libya and Donbass and risked their lives just to tell the world the truth, the majority of journalists visiting those places are still working for the media outlets, tied to or belonging to the multinational military-industrial complex, and made their trips with a particular agenda that serves their masters. It's not just that many of these people are beating drums of war, some might even be considered canons and guns, given their reporting.
Indeed, the conflict in Syria has seen plenty of journalists that were more of a combatants than actual journalists. The people entering the country illegally (despite having the possibility to enter it safely and the legal way) with the purpose of spreading misinformation and distorting the facts, all that to please their patrons, financing their risky escapades. At this point, it is difficult to even consider such people to be journalists, as their actions resemble mercenaries for hire or international spies, not to mention that such deeds gravely violate journalism ethics, to which every single professional journalist is bound to. Apparently this is no longer the issue, at least not in some specific cases such as in Syria. 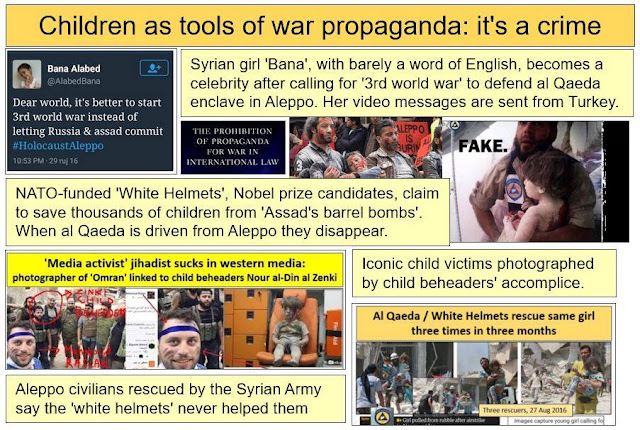 An important issue to bring up here is also the fact that such fabricated and manipulated works of journalism no longer seem to pose a problem for various regulating bodies, whose primary task is to monitor the authenticity and legitimacy of the press. Hardly any of the fabricated reports from recent years were investigated for possible law or ethics-related violations.
Nevertheless, there are several honest journalists remaining that are bravely standing against the massive flood of falsifications and distortions. It shall be noted that many of these people have been threatened, stigmatized and subjected to losing their jobs only because of their work. This serves as a yet another supporting evidence to a claim that there is simply no real freedom of expression in the so-called “free and civilized democratic world”.

In fact, it’s ironic that many of these things are happening in countries that are otherwise known to have introduced laws that allegedly guarantee freedom of the press and publications. Apparently, these rights end as soon as they start to collide with an agenda of the establishment, despite the laws that guarantee them claim otherwise. This further proves that the so-called “first world” is not immune to thwarting the rule of law, a thing often associated with the authoritarian or developing countries.
Luckily for the plurality of the press, the establishment has greatly underestimated the role of mass communication, in particularly internet, when passing information. Without the use of internet, coverage of conflicts in Syria, Donbass or Yemen would be more or less under complete dominance of the military-industrial complex that actually stands behind these conflicts in the first place.

With the emerging presence of various internet outlets not reporting in its favour it faced a severe blow, a thing that did not happen during the wars in former Yugoslavia back in the 1990's due to the lack of internet. While many argue that internet has only made things worse as people seem to be more confused than ever as the information is coming from all possible directions, and sources cannot be completely verified, the truth is that it was precisely the internet that has made things a lot better as regards neutrality, objectivity, accuracy and freedom of speech.

If it wasn’t for internet, hardly anyone living outside Syria would have an opportunity to get a real picture of the situation in that country. The internet has basically uncovered the truth and the real plight of the Syrian people to the millions of people worldwide.
Such thing would be extremely complicated to achieve without internet as the cable and satellite providers usually do not carry any Syrian or independent media channels, not to mention that the Syrian channels can no longer be viewed by satellites in Europe or North America due to the fact that the countries where major satellite operators are based adopted regulations which prohibit Syrian channels to be carried by providers and operators based in their territories.

A reason for this undemocratic move, made by the self-proclaimed guardians of all freedom and democracy in the world, was the fact that the Syrian media narrative was considered provocative and offensive and the one that may lead to negative consequences. In other words, the Syrian media was silenced because western governments feared that their citizens will become familiar with the truth.

Not only was this undemocratic move ironic, given that it was made by people who wanted to export their democracy to Syria by all means necessary, it was also insignificant as pretty much every citizen in the so-called “developed world” has internet access where it's possible to find information about every single detail about the Syrian conflict.


What is also problematic here is that no national or international journalist body or institution has made any complaint or expressed concern, meaning they do not have issues when governing powers make such decisions. This is rather worrying and it only gives credit to the establishment that might also resort to making similar moves during nation-wide social or anti-corruption protests.
There is no doubt that corporate and mainstream journalism has reached an all-time low as consumerism and the multinational military-industrial complex have penetrated it for good. However, the positive thing is that we live in an era of mass communication and the internet has provided an excellent opportunity for the growth and emergence of independent, unbiased and rational media, that puts the journalist ethics and standards way ahead of the profit. At the same time, more and more journalists, working for the mainstream and corporate media are leaving or being forced to leave their positions, due to having moral objections about spreading the lies or were simply dismissed after they “upset” their masters and patrons with their reporting.

Apart from that, running independent media outlets is rather difficult nowadays as they are under constant pressure from the governments and the leading internet companies, in particularly those offering the world's most frequently used search engines and social networks and who are constantly obstructing their work by hiding or even blocking their publications, making them difficult to access or share, etc... So much for freedom of the press in the civilized democratic world. 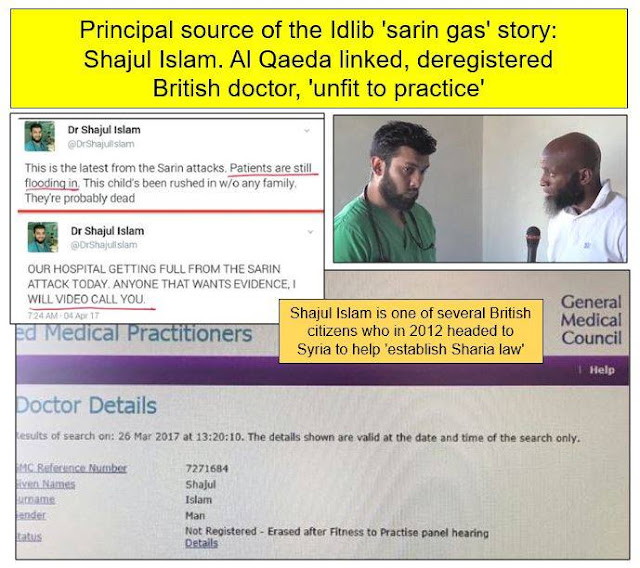